Come join Captain Matt for an epic day of fishing on Block Island! The water surrounding Block Island is loaded with fish from May though October. You’ll catch many species of fish ranging from giant striped bass and aggressive blue fish to feisty sea bass and vigorous fluke. Block Island is known as the striper capital of the world however we also come upon bonita, false albacore and just south of the island we’ve caught Mahi Mahi, bluefin tuna, and other pelagic species.

Day after day – year after year – of fishing around Block Island has given Captain Matt the intimate knowledge needed to put you on the fish when no one else can.

Day after day – year after year – of fishing around Block Island has given Captain Matt the intimate knowledge needed to put you on the fish when no one else can.

Capt. Matt King grew up in Narragansett, R.I. fishing in the waters of southern R.I. As a kid, he fished with some of the great surfcasters of our rocky coastline. In the mid 1990s, he moved to Hawaii, attended culinary school, and pursued a career as a respected chef in some of the best island restaurants. When he wasn’t in the kitchen, King was surfing, fishing, or sailing.

In the summer of 2000, and again in 2001, King returned from Hawaii to chef at Block Island’s popular Eli’s restaurant, owned by his friend Dave Silverberg. It was at that point that he realized that his true calling was to be back in Rhode Island. By 2003, Hula Charters was in full swing and reeling ‘em in.

Capt. Matt was owner of two island establishments, favored by the locals — Juice & Java and Topside Café — where he created his amazing Poke dishes and shaved Hawaiian Ice. The sale of both establishments’ means his focus is solely on his charter business — and with a commercial seafood dealer’s license, King is able to sell his catch to local restaurants. Look for the “B.I Caught” logo on the menu — fresh local fish compares to non-other.

Capt. Matt has perfected the art of fly-casting and has brought that particular skill set to Block Island — sight fishing — fly-fishing the island’s shallows for elusive stripers and false albacore. The slow-down of the busy summer months allows Hula’s Flats boat to get into the Great Salt Pond for this.

Capt. Matt is a Coast Guard certified Captain, is fully licensed and insured, and is certified in CPR. He is a member of the Rhode Island Angler’s Association, and a member of the Block Island Chamber of Commerce. He writes a monthly fishing report in the summer for The Block Island Times, his articles have been published in Rhode Island Monthly, and King has been featured in various fishing shows and magazines.

Capt. Matt spends the winter months in Kansas — King is a seasoned hunting guide for an outfitter that provides some of the best wild pheasant hunting in the country — and in Hawaii, ever-perfecting the art of fly-casting for bonefish, one of the most finicky and selective of game fish. 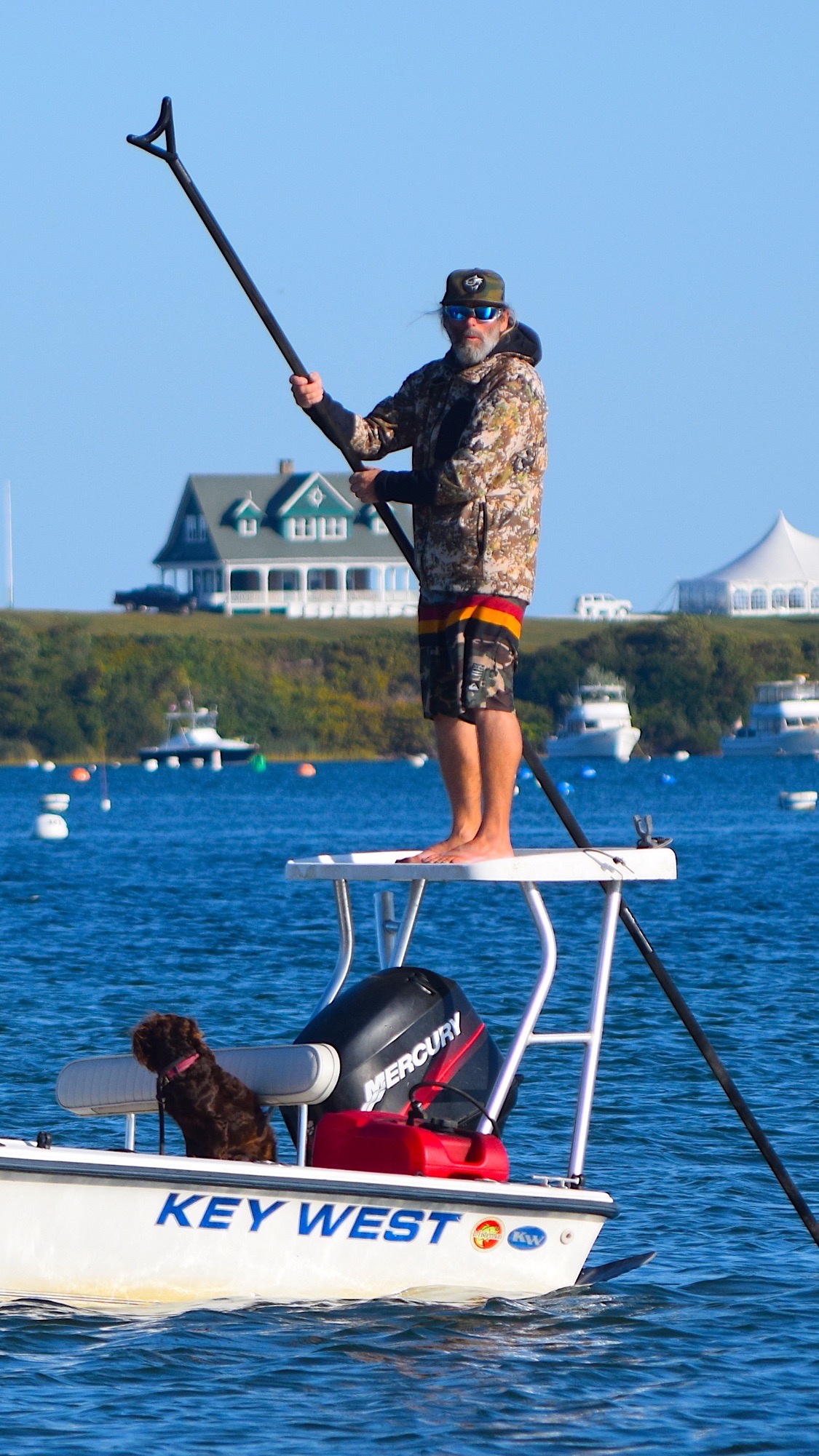 An Interview with Captain Matt Nice one Matt, Luci has seen the pictures on your website and is over the moon, she still hasn’t stopped telling people how she caught a bigger fish than me, even managed to get her out on a bass trip over here, though not as big she managed a couple around the 8lb mark.

Cheers for getting her into fishing, makes my life easier when I want to go now.

Gareth
Folks make no mistake about it ….. When a charter is wanted on Block there is only one place to go- HULA GIRL, Capt. Matt!!! Thanks Again Guys and Aloha
Sal Santangelo

What’s up Guys: Katie and I wanted to thank you for the charter last week, we really had an awesome time and it was definitely a highlight of our honeymoon. I was pleased at how professional you guys were, your knowledge of the local spots, and most importantly the fish that we caught were all outstanding. Not many charter boats are able to boast that they can fill the boat limit of keeper bass within an hour and a half of leaving the dock. Especially in mid August! I was especially pleased that you were willing to adapt to the type method that was working (live eels) and your light tackle gear. It really made for a great morning.

Jared and Katie Kelly
Cap, Just a great day. We keep living for those great days, the Cullina family fishing on the hula girl with Captain Matt. Our great day will go down in family lore.
Joe Cullina
The fishing trip was the highlight of my sons’ vacation on the island. Thank you for a great trip! See you next year!
Tim Robenhymer

The Hula Dog is a 27ft Shamrock with an in-board engine. The vessel has high gunnels with wrap around padding and a spacious back deck. Since its a center console you can cast off the bow and move around the boat freely. Matt also has a flats boat for fly fishing and stalking bass in the shallows.

More Details About The Hula Dog

Shamrock occupies a unique niche in the fishing-boat market by specializing in high-quality production inboard boats, a field that it dominates.

The company’s latest effort is the 270 Open, a 27-foot center console with a single inboard. The 270 features a simple yet thoughtful layout, and is built with Shamrock’s usual exemplary level of fit-and-finish and rugged construction techniques.

Fishing features abound, too. In the cockpit, for instance, we found a full-sized transom door to starboard that opens under a hinged covering board. This isn’t some thin plastic gate that was added for appearances; it’s a real transom door, designed to accommodate big fish.

Other niceties include standard cockpit coaming pads and an insulated, in-deck fishbox that runs down the centerline of the cockpit and drains through a macerator pump. The tackle/bait-prep center in the transom features a cutting board, a fresh water sink, and four slide-out tackle trays. There’s also a 32-gallon live well on the center of the transom. 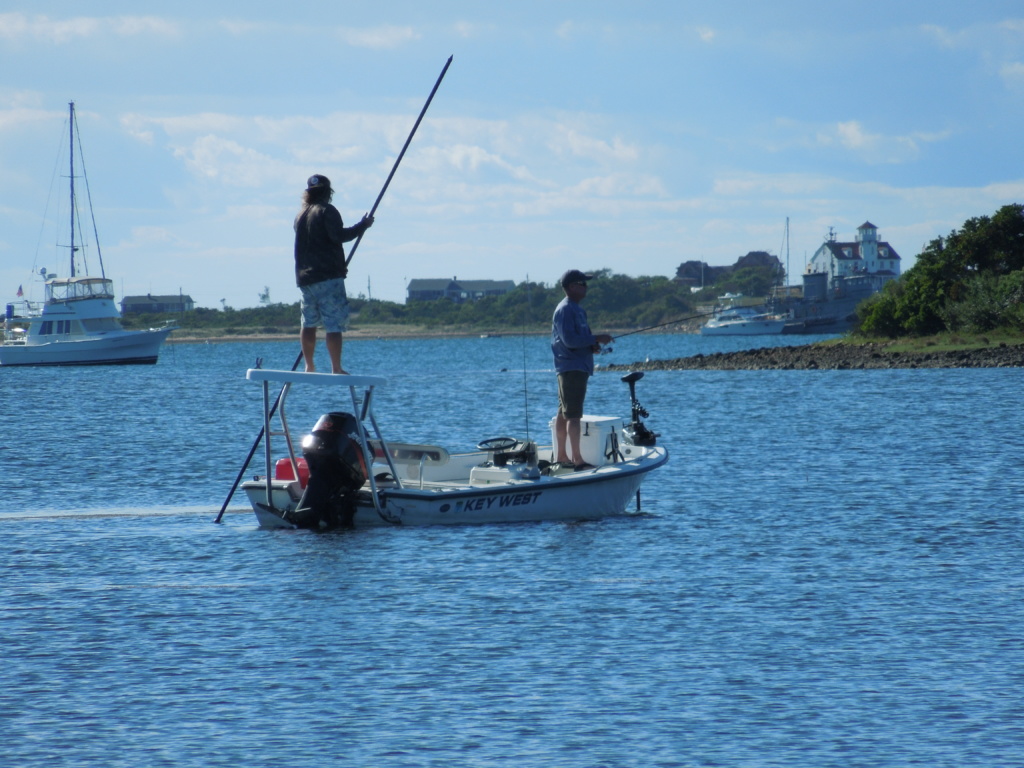 Matt has high end fishing gear that is super reliable and fun to use. The boat is best suited for up to four people to be actively fishing. Let the conditions and your desires dictate what we target. We primarily fish light tackle - casting, bottom fishing, and live eels. In addition to the trips below, we offer custom packages including Fly Fishing on the flats boat or running offshore to catch mahi and chase tuna.

The ultimate split day Block Island fishing adventure.  Your morning catch will be prepared by the chef at the Block Island Beach House, where you will leisurely enjoy your meal over looking the water. (They also have great bbq if you prefer.) Then head back out fishing for the afternoon bite!

Matt lives and breathes to fish and hunt.  Once the waters cool around Block Island and the fish begin to migrate south or in to deep water, Matt (and his dog Lucy) travel to Hawaii where he targets bonefish and deer. He ventures to Kansas for the prime pheasant hunting season in the winter. He also guides for big game fish (marlin and sailfish) in Costa Rica in the winter. Sunset at the Rip

At the north end of Block Island the rich waters of Block Island Sound converge with the deeper waters of Rhode Island Sound. Every evening in May and June the rip comes alive with striped bass and blue fish that have driven shoals of sand eels to the surface. (Turn your sound on to hear the fish!) Just after this video, Bluefish were caught on 5 consecutive casts.

What we fish for

Block Island is the holy grail for Striped Bass. Matt routinely catches bass throughout the summer in the 50 inch 40+ pound range. During the spring and fall these beasts can be hooked on the surface casting or fly fishing.

This iconic New England fish is truly a thrill to catch. Pound for pound it is one of the hardest fighting fish species – often leaping out of the water and stripping line off the reel.

These delicious and vigorous fish are fun to bottom fish for with light tackle. Often as fast as you can sink your bait you can hook another sea bass if you know where to go.